(The link above is to a PDF copy from the History research commissioned by our late Pastor, Fr. Donald W. Neumann and contains more history detail leading to the construction of the present day church building.)

Roman Catholic Oblate Missionaries began regular visits to Maple Ridge as early as 1875.  By 1881 there was a small Catholic church in Port Haney, and by 1920 there were enough Catholics in Pitt Meadows to warrant the opening of a mission chapel.

In 1944, the name of  The Most Pure Heart of Mary was given to the congregation, and was moved into a rebuilt Chinese bunkhouse in Hammond that was donated by the mill.  The structure burned down three years later and a new church was built with the insurance money.

The building was later moved (in 1963) to a 10 acre farm that was originally the residence of K. Ito, where the church rectory was built as a residence some time around 1932.  Soon after the move, the parish was renamed to St. Luke’s. 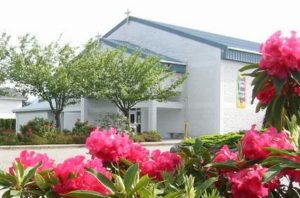 By the late 1980’s the congregation had outgrown the original church on the site.  On December 15, 1990 a newly constructed building (gymnasium) was completed and blessed as the new church which we continue to use for our Catholic services.

The original church was renamed the “Old Church Hall” and was used for parish and community events.  In 2015, this building was torn down and construction began on the new Parish Family Center. 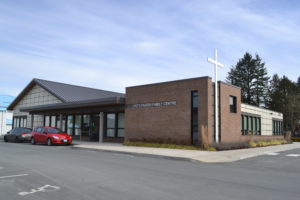 Finally, on April 2, 2016, after more than 10 years of planning and 10 months of construction,  Archbishop J. Michael Miller officially blessed the building along with former pastors Father Amador Abundo, Father Mario Marin, who was Pastor at that time,  and parishioners who had dedicated time, talent and treasure to this long awaited addition to our faith community. 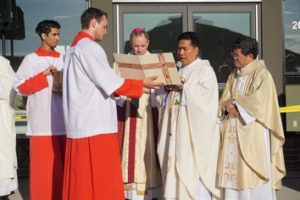 Please join us.  All are welcome!

Watch this space for more information.